We’ll be closing on our house this coming week and if that seems fast to you, consider how I feel!  The house market it apparently smoking hot because we had three offers within three days of putting the house on the market.  I’ve always maintained that when the time is right, things will fall into place.  Let me tell you…  This has only strengthened that belief.

Everything is going so well, CC and I are both slightly dazed, but that hasn’t stopped us from snapping and snarling at each other.  The stress of getting everything together has been horrendous, but we knew it was going to be, so we’ve been really clear about not getting to upset about being short with each other.  That’s gone a long way towards keeping the peace.

We’ve hauled away four to five times the amount of stuff that we’re taking with us.  Good stuff.  Stuff that someone somewhere is going to be overjoyed to have.  When we started there was a horrible feeling of insecurity that went with getting rid of it all.  We’d put something on the pile to go with us because we couldn’t bear to part with it, but as the hours and possessions passed, we’d revisit the “going” pile and pull stuff out and shake out heads at ourselves.

Many of you might be thinking that we’re paring down to nothing, but that simply isn’t the case.  I’ll give you a good example.  I have a hand-crocheted wall hanging of my last name.  It’s beautiful!  I’m not taking it.  Why?  Because as beautiful as it is and as much as I appreciate the time and effort and thought that went into the making and giving of this gift, it is NOT my ‘style’.  I’m not in love with it.  I’ve kept it because I felt bad about throwing it out.  For someone else, it might be just the thing, but for me…  not so much.  CC and I discussed it and we concurred, that it just wasn’t our thing.  On the other hand, I have already packed up my seed collection and the baby doll that my grandmother made for me when I was a little thing.

The difference is love.  There is no point in having a bunch of stuff that you don’t really love cluttering up your life.  It weighs on your mind, even if you never consciously think about it.  I know because my load is lighter with every load we haul to the thrift store and each treasure that I unearth from the clutter.

Posted by Dare Greatly on October 19, 2015 in Thoughts

I’m not getting any younger, but I almost didn’t get any older.  As I have aged (like many other people), my younger stupidity has caught up with me in the form of aches and pains; creaks and strange gravelly grinding noises.  To stave off the worst of some of these, I have tried running, jogging(the only thing worse than running), walking, tai chi, yoga, swimming, weight lifting, and a million other things that are guaranteed to help you feel young again.

What a load of garden compost!

I don’t know anyone that feels younger for having done any of these things.  I have, however, found that I do creak and ache less if I swim regularly and maintain a certain flexibility with yoga and tai chi, which is what brought me to the place of writing this post.

It all started with Pinterest.  I’ve been having some work related aches and pains in my back and decided I’d try their handy-dandy yoga back stretch for neck and back pain.  See link Yoga

Do NOT do this if you are well endowed!  My boobs almost smothered me!  Luckily, I had sense enough to realize I was endangering my own life and stop before I passed out.

All that being said, it did lead to me finding a better way to store my yoga mat.  It had been lurking in the bottom of my closet, but today I had a lightbulb go off and thought about all the unused space in the TOP of my foyer coat closet.  Sure enough one nail later I was in business, except for the “it wouldn’t stay on the nail” part.  Once again, Pinterest came to mind.  This time in a good way.  I’d seen where people have used those cheap plastic shower curtain rings for hanging scarves and belts and such, so… 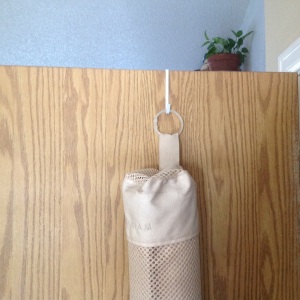 Here it is hung on the door so you can better see how I have it attached.  The picture for the unused space isn’t as good, but you get the idea.

Posted by Dare Greatly on November 22, 2014 in Fitness